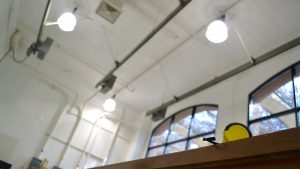 New LED lighting in a College of Textiles student lab will save $4,700 annually in avoided energy costs.

During the academic year, the senior design lab of NC State’s Textile Engineering, Chemistry and Science program hums nearly round the clock with students collaborating and creating.

Until mid-March it also hummed with 84 metal halide and fluorescent light fixtures, which were recently upgraded by NC State Energy Management to high-efficiency LEDs that save energy and improve quality of light in the lab.

With new fixtures and occupancy motion sensors installed, the retrofit project is expected to save $4,700 annually in avoided energy costs, providing a return on investment in less than six years.

“True energy savings could be significantly more. The old lights had a long warm up time, so once they were turned on for the day, no one wanted to turn them off. LEDs are instant on and off, which should encourage users to turn off lights when the room isn’t in use,” said Kerby Smithson, an energy program coordinator with NC State Energy Management.

Over the years, diminished lighting quality had led to the addition of more lighting fixtures in the lab. The high wattage of the fixtures created excess heat for the building’s climate control system to overcome, making the lab difficult to cool. 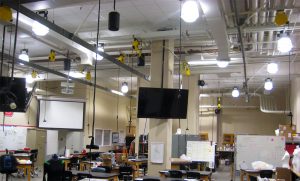 “With the new LED fixtures being of significantly less wattage rating, the incorporation of occupancy sensors throughout the space and the decreased draw on the HVAC system, this space is certainly consuming much less energy,” said Geoffrey Scott, the lab’s research operations manager.

“Students are already commenting on how much more pleasant the light is on the eyes and that the temperature in the space is much more comfortable. Having a more comfortable working environment will certainly contribute to increased productivity of students,” Scott said.

This project is one of many lighting upgrades on campus paid for with funds the university receives for energy efficiency investments that reduce utility costs.