Campus energy and water management efforts continue to provide important fiscal and environmental benefits, according to NC State’s 2017 Strategic Energy and Water Report. Published in December, the report highlights the university’s efforts to reduce utility use and cost during the 2016-2017 fiscal year.

“Energy and water are among NC State’s most necessary and costly expenses,” said Erik Hall, NC State’s Director of Energy Management. “By actively managing and reducing our energy and water use, the university conserves vital fiscal and natural resources.” 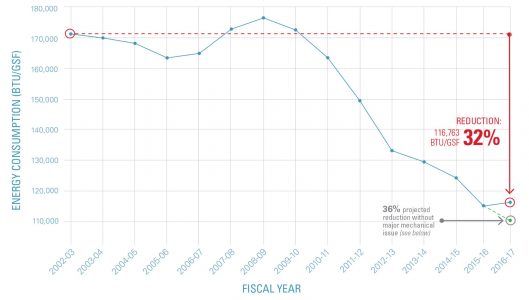 Campus energy use per gross square foot declined 32 percent from the baseline fiscal year of 2002-2003.

During the 2016-2017 fiscal year, campus energy use per gross square foot declined 32 percent from the baseline fiscal year of 2002-2003. That’s a slight increase from the previous year due to mechanical maintenance and repairs at the Cates Utility Plant, where combined heat and power technology is the single largest contributor to campus energy efficiency.

At Cates Utility Plant, NC State generates electricity on-site. Waste heat from the plant is recovered and converted to steam, which is then used as an energy source for heating in campus buildings. In 2017, the system experienced reduced operations due to mechanical issues and lengthy planned maintenance.

“That caused the plant to generate 8.5 percent less electricity, which decreased the efficiency of our heat generation and increased our overall energy use,” Hall said. “Had the plant operated at its normal capacity, we estimate overall campus energy use would have declined to approximately 36 percent from the baseline year, a 3 percent reduction from 2016.” 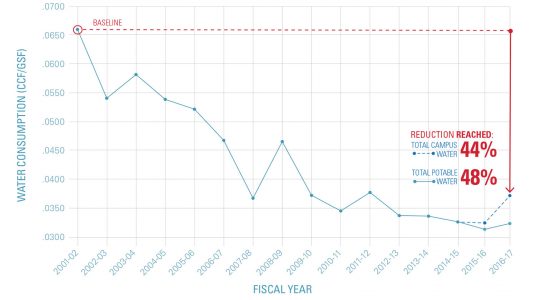 Total campus water use per gross square foot was 44 percent below the baseline fiscal year of 2001-2002.

Total campus water use per gross square foot was 44 percent below the baseline fiscal year of 2001-2002. That’s a slight increase from the 2015-2016 fiscal year when NC State began using reuse water  supplied by the City of Raleigh.

Reuse water ‒ sometimes called reclaimed water or non-potable water ‒ is wastewater treated to a high standard and reused instead of being discharged into a waterway. On Centennial Campus, reuse water is used for irrigation, toilet flushing in Hunt Library and in cooling towers at the Centennial Campus Utility Plant.

“Because reuse water has a higher concentration of impurities than potable water, the cooling tower basins must be more frequently drained. That increases water use,” Hall said. “However, the benefits of reuse water ‒ primarily decreased cost and drought resistance ‒ outweigh the additional water use.” 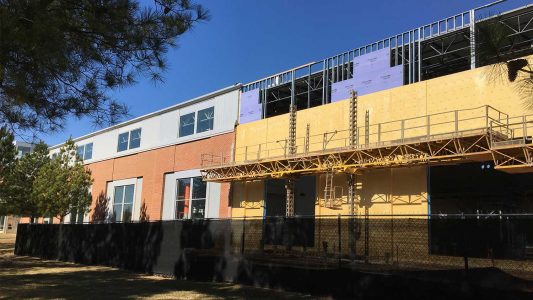 At the Centennial Campus Central Utility Plant, 6.5 megawatts of electrical generation with combined heat and power technology will be soon added, as well as a 20,000 kilowatt-hour thermal energy storage tank. Both projects are infrastructure investments that will reduce energy costs.

At the same facility, the university is installing 6.5 megawatts of combined heat and power technology, which enables energy generation on campus. By recovering waste heat and converting it to steam, Hall said the system’s efficiency increases to 40 percent as opposed to 20 percent in a conventional plant.

“These vital projects not only reduce our energy and water consumption, they also provide for necessary building and system improvements,” said Hall.

The full Energy and Water Report is available online.

Centennial Campus Outage Planned for March 31 No projects at this time.