Inefficiencies in mechanical systems are bound to occur on a campus with millions of square feet of climate-controlled space. When they do, it’s costly ‒ both to energy bills and occupant comfort.

“When we look at a building, we try to eliminate waste by making the building operate the way it’s supposed to. When you eliminate waste, you save money,” said Michael Shelton, a commissioning engineer and supervisor of NC State’s Commissioning Team.

The team’s work in 15 campus buildings has produced more than $4.5 million in avoided energy costs since 2012. These savings offset diagnostic and repair costs, as well as rising utility costs on NC State’s growing campus.

The five technicians on the Commissioning Team find and solve problems affecting a building’s mechanical system. In large buildings, these systems are complex and powered by technology that varies building to building.

When some parts fail, mechanical systems often compensate. The only indicator of a failure might be an increase in water or energy use.

“It’s the reality of buildings. Things are going to break that people aren’t going to see,” Shelton said. “We go in with a sharp eye and find things that are hidden.”

Recently in D.H. Hill Library, the team identified a major piece of equipment that wasn’t functioning as designed. The team wired and programmed a few affordable sensors and created an estimated $15,000 of savings annually with that single repair.

“The work we do often pays for itself before we leave the building,” Shelton said. 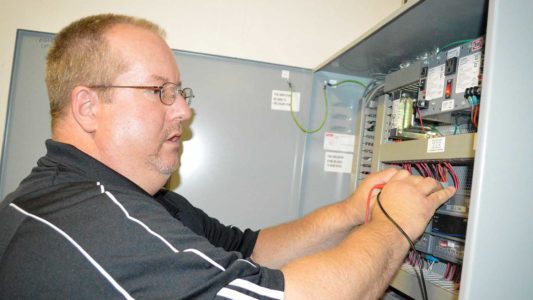 “We look to see if things are performing the way they are intended,” said technician Chris Young. “We take a deeper dive and closer look than external vendors would.”

The team fixes some problems as they work and estimates costs for more extensive repairs. The technicians also train building occupants how to more efficiently operate the building.

“It doesn’t matter how efficient a piece of equipment you put in a building is. What matters is you use that piece of the equipment the way it was designed,” Shelton said.

“They’ll compare how the building is operating to its intended use. Our hope is to find bugs in the program, deliver better service for occupants and save energy,” Shelton said.

“Our primary goal is to make sure that the folks at NC State have the spaces that they need and that these spaces function the way they expect them to. If we do that, as a side benefit and a bonus, we’re good stewards of NC State’s utility budget,” Shelton said.