On the windows of NC State’s 1911 Building, historic meets high-tech.  A specialized ceramic window film has been applied to the building’s historic windows in order to reduce energy use.

Coordinated by NC State Energy Management, the project covered 2,723 panes of glass on 211 windows with the film, which cuts in half the amount of solar heat gain.

“Up to 40 percent of a building’s heat gain comes in through the windows via solar radiation,” said Kerby Smithson, the energy program coordinator that managed the project. “We should see most of the energy savings in the summer due to reduced air conditioning use, but we also hope to save energy in the winter because the window film will reduce the amount of heat that radiates out of the windows during cold months.” 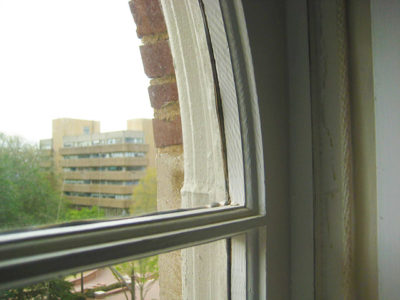 The film was applied this spring to 211 of the building’s windows.

Built in 1909, the building’s original windows feature architectural character that would be difficult, as well as cost-prohibitive, to replace. Energy-saving window film is a fraction of the cost of new windows and is nearly unnoticeable once applied.  Energy Management will monitor the building’s energy use over time, expecting a payback on the project in about three years.

“The window film aims to enhance thermal performance of single pane windows while allowing more sunlight into offices without decreasing temperature comfortability,” said Cara Smelter, who works in the building. “I particularly appreciate that this project took into consideration architectural integrity of this historic building and did not compromise the original panes that remain.”

In 2014, a similar film was applied in D.H. Hill Library, where the the film contributed toward energy savings and blocked some of the sun’s ultraviolet light. Similar results are anticipated with the 1911 Building’s large east- and west-facing windows that receive significant daily sun exposure.

“The 1911 Building uses more energy per square foot than similar buildings,” Smithson said. “We expect that this project will cost-effectively reduce energy use while making the building more comfortable for occupants.”